The Mermaid Pool, and legend. 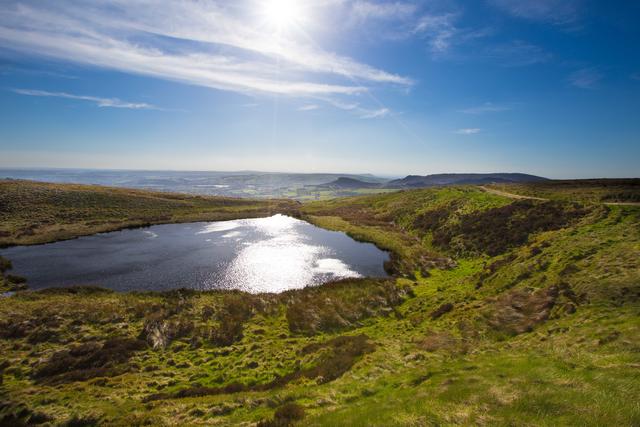 Believe it or not the land-locked county of Staffordshire has its own mermaid folklore. Nearby Blake Mere ("Black Pool") is the site of what may be the only inland mermaid legend in England. The small, remote hilltop lake, around fifty metres wide, is a particularly atmospheric site.

Set on a craggy and barren southern edge of the Peak District, beside the Leek to Buxton road, it is said that the dark peat-stained waters of the pool are bottomless; cattle refuse to drink there and birds never fly above it. Over the centuries it has been the scene of a number of mysterious drownings and even a murder, when, in 1676, a woman pedlar was dumped in the pool by a local villain.

Tradition holds that The Mermaid rises from the pool at midnight to lure unwary travellers to their deaths in the dark watery depths - but only single men, apparently. There are various legends concerning the origin of The Mermaid. In one, a sailor from nearby Thorncliffe fell in love with her and brought her back from the sea. In another she was originally a witch who transformed herself into a water nymph after being thrown in to the pool during the Middle Ages.

“A lake that with prophetic noise doth roar;
Where beasts can ne’er be made to venture o’er—
By hounds, or men, or fleeter death pursued,
They’ll not plunge in, but shun the hated flood.”

At one stage the locals tried unsuccessfully to drain the pool to uncover its secrets.  Their digging gave the pool its distinctive heart shaped appearance.

The Inn was originally known as Blakemere House, but became know as the Mermaid Inn locally as the legend took hold.  For many years the Inn was a drovers inn, and latterly a country pub.

Blake Mere (pool) is just 500m or a 10 minute leisurely stroll from the Inn and is well worth a visit.